THE LOCK DOWN DIARIES ( XV)- JOURNALISM AS NEWS LAUNDERING AND BHAKTI. 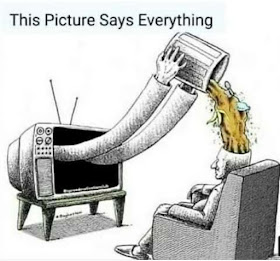 Garbage recycled as news
This being the eco system of journalism in India today, it should come as no surprise that the field is being taken over by parasites who destroy the very host they feed on. The so called "news" channels, especially the English ones, deal only in views, not news. Their republican credentials and reflection of the times, now or previously, is all a charade for they have become the ultimate recyclers- they recycle the govt's handouts and untruths as news, and the stench of the resultant garbage exceeds that of the Ghazipur landfill in my area. Their arrogant, jack of all trades, opinionated anchors spread the poison of communalism and intolerance on a nightly basis, defending the indefensible, spawning bullies and reprobates, reducing discussion and debate to a billingsgate spectacle. The print media is only slightly better- its editorials no longer have the courage of their convictions, its op-eds pussy- foot around issues instead of tackling them head on, they are more akin to exercises in tight rope walking than courageous journalism. They are asking questions all the time, but of the Opposition not the government of the day; they don't wait for the answers, because they have already manufactured them "en studio"; they do not serve a nation but an individual, a revived bhakti cult.
Precisely when Indian journalism has reached its nadir, it has been struck a mortal blow by the pandemic. Already in dire straits before the pandemic, the economic turbulence and loss of both readership and advertisement revenues is forcing many papers, on-line sites and channels to shut shop. The circumstances are particularly difficult for small town newspapers who barely survived at the best of times. Since March there have been large scale lay offs, salary cuts, forced furloughs and closures even in the biggest media organisations: hundreds of journalists have lost their jobs.
This is an alarming trend for the health of our democracy. Mofussil and small town publications are vital in keeping a check on governments for it is they who have a finger on the real pulse of nations and are the first to report on a government's misdeeds, doing the spadework for the national media. Equally important, as Cyril Sam of  NEWS@ COVID 19 puts it, " Each lay off and closure signals our information eco-system becoming poorer and our information sources becoming poorer. Each layoff, cut-back,closure also signals the weakening of democracy in India as newsrooms hollow out and there are fewer journalists to keep a check on power and raise questions in the public interest on our behalf."
India's free press is at its weakest precisely at the moment it is facing its most severe challenges since Independence. It does not help, but it was inevitable, that it is now represented by someone like Major-General GD Bakshi.
Avay Shukla at 19:27
Share